Georgia Governor Brian Kemp proclaims ‘Emperor of Japan Day’ to celebrate the accession of His Majesty the Emperor (May 1, 2019) 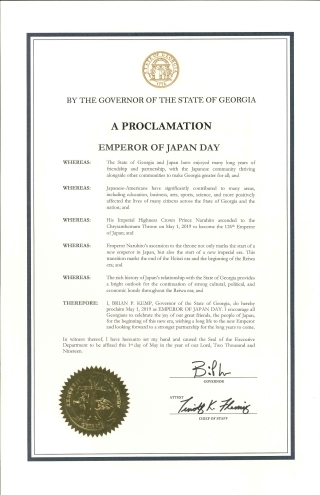 On May 1, Georgia Governor Brian Kemp issued a proclamation declaring “Emperor of Japan Day” in celebration of His Majesty the Emperor’s accession to the throne.


In the proclamation, the Governor references the new Reiwa era and the contributions of the Japanese community to the State of Georgia, expresses a bright outlook for the continuation of strong cultural, political, and economic bonds throughout the Reiwa era, and celebrates the joy of the Japanese people for the beginning of the new era. He prays for the prosperity and happiness of the new Emperor and looks forward to a stronger partnership in the long years to come.